At a recent book club meeting, we read and discussed the classic “Catcher in the Rye” by the notoriously reclusive (and now deceased) J.D. Salinger. It was a book I hadn’t read since probably my late teens or early 20s – the usual age when people seem to gravitate to the book. It seems to have been written for teens and young adults. But that’s not the only age demographic to whom the books appeals.

Reading it again, I found that its character of Holden Caulfield, and his youthfully cynical perspective on life, still holds power over me. To be sure, Holden is disillusioned with life as he teeters on the cusp of adulthood. Finishing the book, I found I’d fallen in love with Holden once again.

A particularly meaningful passage for me was the scene in the Natural History Museum in New York, where Holden lingers by the exhibits that never change – the deer drinking at waterholes and the birds in midflight, perennially aloft. “The best thing, though, in that museum was that everything always stayed right where it was. Nobody’d move,” Holden remarks. To me, it’s symbolic about his reticence to leave childhood behind and his desire for things to remain the same.

Having finished this book, I – like so many other readers — wanted to know more about the mysterious Salinger, the author with the brooding eyes and handsome face. I watched the 2013 documentary titled “Salinger” and learned more about his reclusiveness, his absolute absorption in his writing and the life of his characters – a habit that often meant the neglect of his second wife, Claire Douglas and their two children, Margaret and Matthew – as well as his interest in holistic and alternative medicine, and his embrace of Eastern religions and later Scientology.

The documentary also led me to discover that his daughter and memoirist, Margaret “Peggy” Salinger and the woman with whom he lived for 11 months – the writer Joyce Maynard, had written books about the lives they shared with the reclusive author.

I ordered both their books online and read Peggy’s first, “Dream Catcher” and then Joyce’s, “At Home in the World.” I was eager to know what it was like to live with a man who was engulfed by his own creative endeavors. I was also particularly interested in knowing about Joyce’s experience, considering that she was still a teenager when she met Salinger, who at the time was 53. Salinger was notorious for his attraction to women vastly younger than he was and that intrigued me, since it mirrored a relationship I had had with a man considerably older than I was that similarly lasted only 11 months and ended just as abruptly as Joyce and J.D. Salinger’s.

What I learned was that J.D. Salinger, or as he’s known to his familiars as Jerry, was Holden Caulfield (or should I say Holden Caulfield was Jerry Salinger). He was literally channeling himself through his character of Holden. I also learned, through the pen of Peggy and Joyce, that while Salinger was charming and charismatic, he also was narcissistic, self-absorbed, discontent, contemptuous and critical of others while unable to accept criticism towards himself, manipulative and in many instances an abusive person. 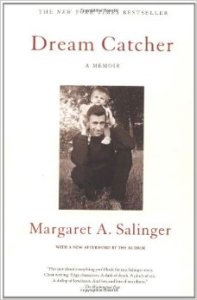 Peggy’s memoir is voluminous at about 450 pages, which are filled with copious footnotes. It is towards the end of her book where I find particular meaning. As she’s grown and has her own child, she reflects back on her life with her famous father. She recalls a conversation she had with him and what she says to him about his selfishness as a father:

“You’ve never once inconvenienced yourself for your children. You’ve never interrupted your precious work. You’ve always done exactly what you wanted, when you wanted,” she writes on page 416 of “Dream Catcher”.

She very succinctly articulates what I think most children feel but are unable to express growing up with a parent who is self-absorbed. It’s only when these children grow up that they are able to see the self-absorption for what it is: abuse and neglect. I can relate to this with my own father. I also found Peggy’s following words profound:

“In giving up the dream of a perfect Daddy, some of my memories of happy times with my father returned. These are real and I know they belong to me. … Similarly, in giving up my pursuit of the heavenly Daddy, the nightmare of the hellish Daddy began to give up its pursuit of me. I am able to see a talented man who, like the rest of us, is neither all good nor all bad” (p. 431).

That’s an important lesson I think for all of us as we relate to our parents. Our parents are human though as children we make them into gods. We all expect our parents to care for us selflessly and when they don’t, it’s a great disappointment. It causes us to wonder what we did as people to not have their undivided love and support. It’s not about us though. Everyone has flaws and everyone does the best with the life skills that they have. Take nothing personally — not even the way your parents raised you.

Joyce Maynard’s “At Home in the World”

Reading Joyce Maynard’s book, I was moved by its unflinching honesty. Both admired and reviled at the time the book was published in 1998, I found myself marveling at how Joyce puts it all out there, warts and all. She writes about how Salinger first began writing to her after she was published in the New York Times at 18; how quickly she became swept up in a relationship with him; and how he convinced her to leave Yale University and to live with him at his home in rural New Hampshire. She talks about her worship of Salinger; her inability to consummate her relationship with him; and the very abrupt and cold way that Salinger cuts her out of his life when he has no more use for her.

At the age of 44, Joyce finally confronts Jerry about their relationship. She asks him, ‘What was my purpose in your life?’ Salinger is literally unable to answer that question, spewing back, “That question is too profound. You don’t deserve an answer to that question.”

It’s not because she doesn’t deserve an answer that she doesn’t get it. It’s because men like Salinger have no insight into their actions and don’t know why they do the things they do. What attracts a 53-year-old man to a teenager and asks her to give up her life to be with him only to cut her out of his life not even a year later?

It’s at that moment of confrontation, so many years after the breakup, that Joyce discovers she feels sorry for him and only wants to let him go. He accuses her of wanting to exploit their relationship in her book. Joyce knows the truth though … that she as a teenager was the one who was exploited by Salinger. As abusers are wont to do, he denies her reality.

What a chilling thing to say.

It’s interesting about charm and charisma. These qualities can be intoxicating. In someone innocent, they are pleasing and benign. But when used by someone with ulterior motives, they can ultimately defile the innocence of others, turning a naïve and trusting person into someone full of cynicism and self-doubt — kind of like Holden Caulfield.

Salinger’s book, I’m sure, will live on forever. Holden’s voice will continue to charm countless others. There’s even word that more of Salinger’s previously unpublished work will be released this year. I’ll be curious to read it. But it’s interesting how authors morph themselves into their own fictional characters, revealing at what age they’ve essentially held themselves in arrested psychological development.

Reading Peggy and Joyce’s books was a fascinating look into their own realities and into the life of an author who had a hard time dealing with reality. Salinger seemed also to have trouble with aging, taking responsibility for his actions, and simply just growing gracefully into maturity. It’s as if Salinger, like Holden Caulfield, was reticent to let go of youth – or the next best and viable alternative to him: living vicariously through the youth of others.

What recollections do you have of reading “Catcher in the Rye”? What about the book appealed to you most or least? What do you like best (or least) about Holden Caulfield?

3 thoughts on “The women in J.D. Salinger’s life: Making sense of fathers and lovers”

Tales and tips from a writer and book editor

Thought Catalog is a digital youth culture magazine dedicated to your stories and ideas.

Plowing through Life in the Country...One Calf Nut at a Time