Every so often, you meet a person who truly inspires you in how they approach life, their attitude about dealing with a chronic illness, and who influenced them to be the best person they can be.

I recently had the opportunity to interview Hillary Turk, a woman who has been battling two types of lung cancer since 2008. 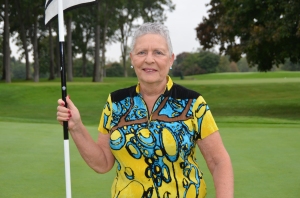 Hillary works as a therapist in private practice in Farmington Hills and has been treated at the Barbara Ann Karmanos Cancer Institute, my employer, for the duration of her illness.

Hillary and I spoke about a lot of things during our interview – her illness and her treatments; her son, Ian; her life and her family; and how her maternal grandmother was a role model for her.

Hillary is the type of person with whom it’s easy to build a fast and warm rapport. At the age of 65, she’s seems (at least for me) to be at the quintessential grandmotherly age – someone who is different from a mother and in some ways better – someone very wise, warm and accepting.

Interacting with her reminds me so much of the loving and extraordinarily rich relationship I enjoyed with my own grandmother, Loretta, who passed away at the age of 91 back in 2008. I’ll always remember my grandmother being 65, with so much love, sparkle and humor as part of her personality. Grandma was kind, fun, funny and — let’s face it — a pushover. She was also opinionated, strong, smart and beautiful. She was there for the major holidays; there to babysit me and my sister during the summers when we were young; and there every weekend we went to see her.

My grandmother played a major role in raising me to be the woman I am today, just like Hillary and her grandmother.

“My grandmother had a strength about her and had an attitude that you can do anything you want to,” Hillary said to me about her own grandmother, Sadie Wilner. “She was my role model. There was something about that generation – they view you (as a granddaughter) differently.”

Hillary credits her own attitude for why she’s survived lung cancer for so long – an attitude developed thanks to her grandmother. Not only that, her work as a therapist has sustained her too.

“I love what I do and I think work has given me tremendous strength,” she said. “It’s all about perspective. Think of yourself as a survivor, not a victim.”

My article about Hillary Turk ran in the October 22-28 edition of the Detroit Jewish News. Read the article here.

Tales and tips from a writer and book editor

Thought Catalog is a digital youth culture magazine dedicated to your stories and ideas.

Plowing through Life in the Country...One Calf Nut at a Time